The Compustar schematics. Part 2: the display board

This is the second part of the Celestron Compustar schematics. You can find Part 1 here: https://www.aemfoto.it/wp/2017/05/31/the-compustar-schematics-part-1-the-microprocessor-board/.

As I did in part 1, since there is no silk screen on the board, the designators (IC1, R1, and so on…) are just made up, and may also be quite randomly assigned. Moreover, I’ve not put in the schematic all the 100nF bypass capacitors (while all the other capacitors should be documented).

I divided the schematics into multiple pages. Let’s see the pages one at the time, with a little description. 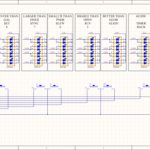 This sheet contains the top row (of 8 keys) of the selection keyboard with the corresponding LEDs indicating their function. 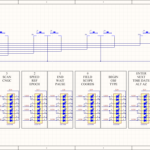 This sheet contains the bottom row (of 8 keys) of the selection keyboard with the corresponding LEDs indicating their function. In this case the LEDs are below the keys themselves.

Here we can find the 4 movement buttons (North, West, South, East, lay down in a diamond shape) plus all the LEDs in the top part of the Compustar (just above the top row indicators LEDs) and the two 7-segment displays used to indicate the number of objects in the neighborhood of the selected object. In this sheet I’ve also put the pullup network resistor (RN3) which is common for all the buttons. 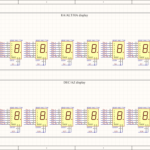 The two top rows of the 7-segment display, normally used to display telescope RA and DEC, with their indicator LEDs (located to the right and to the left of the digits themselves). 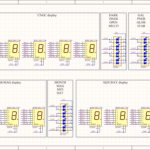 The two bottom rows of the 7-segment display, normally used to display the CNGC/REF number with its indicator LEDs (located to the left), the object descriptor indicators (DARK/DNEB/OPEN/MULTI…) on the right and the top part of the quality indicator (from 7-Superb to 4-Good). Below that, the Month/Magnitude and the Day/Size 7-segment displays with the indicator LEDs (in between) and the bottom part of the quality indicator (from 3-Fair to 0-Unkown). 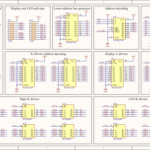 This last sheet contains the connector to the microprocessor board plus all the demultiplexers and drivers used to drive all the LEDs and displays.

The Compustar CPU is constantly refreshing every digit or led group in a 32 steps round robin loop. Since there are 16 led groups, each group is refreshed twice, giving a refresh frequency of something more than 100Hz. On the other hand, there are 24 digits, so they are refreshed once per loop (giving a refresh frequency of about 50Hz) with a 8 steps gap when no digit is refreshed. 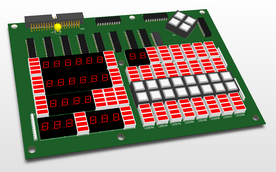 I’ve also done a 3D rendering of the board in a 3D PDF, that can be downloaded from here (warning! big file, 9MBytes!)

Note: these PDFs (expecially the 3D rendering) will probably be incorrectly rendered by the internal PDF viewer of either Firefox or Chrome.