That happened to me with this Compustar emulator.

I wanted to write a software emulator of something vintage but at the same time not too complex, because I just wanted to have fun and I did not want to start a big software project.

Then I wanted to learn how to use the Celestron Compustar we have at the “Osservatorio Città di Legnano” (link here, italian only), but my time at the observatory was quite limited and the documentation was partially missing.

And then, the new 2009 EPROMs arrived from Tom Sorbel and I had to install them (Angelo… you fix computers, right? Would you please install these new “things” in the “telescope”?).

This made me realize that we had no documentation, no schematics, no parts list, nothing. And If I ever had to fix something, I also had no idea about how it was supposed to work… and it’s difficult to learn how something works when it is broken and it does not do so.

So I begun a long (and somehow funny) work of reverse engineering the Compustar hardware and software, figuring out how the different hardware parts of the circuit were working in conjunction with the software. I’ll write more about the Compustar hardware in a future post, summarizing my findings about how it’s internally working. For now I just want to say I’m very impressed by how it was designed. It is a real masterpiece, given the constraints the original designer (who is, I suppose, Mike Simmons, since his name is written in the software itself) had to face in the 1986. One thing above all: RAM was expensive back then, and the whole Compustar is running in just 256 bytes!!

This work made me discover a few bugs (very few bugs, actually, especially for a software that was written for sure in assembler), and at the same time made me think about improvements and new ideas…. and therefore an emulator was literally required to deeply understand all the details and eventually try all the (software) modifications I might want to do. But this is the subject of (another) future post.

The first release was ready in 2013, but at the time it was not a really finished software and then I didn’t think it could be generally usefull, so (I’m lazy, remember) I didn’t publish it anywhere.

The decision, last year, to build this new site with my friend Marco made me change my mind and so, at last, I’m now (finally) publishing it.

For those who don’t know what a Compustar is…

Unfortunately there is no much information about the Compustar in internet. It’s an handheld dedicated computer made by Celestron in 1986 (I think) to drive 11″ and 14″ telescopes. It was very advanced for 1986, but it is still very usable today: it’s just missing the moon and the planets but the object catalogue is quite complete.

If you want to play, start by pressing the BEGIN button and follow the instructions by entering the (night!) time, the date (choosing a year before 2000: the Compustar was not Y2K ready) and your coordinates (you can also make them up). The telescope will then slew to REF star 11 (POLARIS). Press ENTER again and the telescope will slew to an alignment star choosen based upon the location and the time you entered before. Press ENTER for one last time and the setup and alignment procedure has been completed. You may now slew to some other object: let’s choose, for example, Messier object M81: press SLEW, then M (for Messier) then 81 and finally press ENTER. You will hear a beep and the telescope will start slewing to the coordinates of M81 after having shown a few informations about the object itself.

The main software interface is very similar to the Compustar itself. You can press any button by clicking with the mouse or using the keyboard (a tooltip on the white button square will tell you the corresponding key). 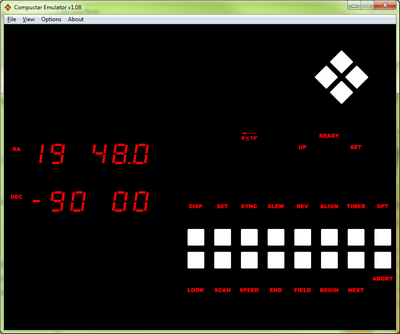 The View menu will allow you to change the “Low battery” and “Daylight” conditions (which will simply change a label on the Compustar display), enable and display both joysticks (click and drag the big yellow ball to move the joystick, while the two white triangles are the joystick buttons).

This menu also shows all the “debugging” features of the emulator (which I may describe in a future post, if there is enough request: they are very complex and require a deep knowledge of the 8051 processor).

The Options menu will allow you to select (and run) a custom firmware and to change some emulation details (like the serial port device, so you can try to control the emulator – and the Compustar itself – from some external device).

The File and About menus are just what they are.

You can download the installer here, less than 2 MBytes